bliss is one year old - the year in numbers

Today, bliss is one year old! Back on the 6th November 2009 I released the very first version of bliss: 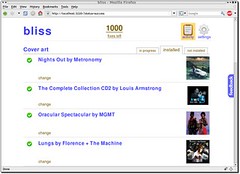 The initial release was for the Windows and Linux platforms. In June we added VortexBox support and then a few weeks ago the Mac OS X version was released.

We started with the cover art rule and have added the file organisation rule. In truth, I hoped we would make faster progress on developing new rules, but I decided to prioritise on greater platform support initially. I'm currently working on the missing information rule, which ensures all albums contain the information you think is important, such as the year of release, genre and more.

Initially I thought one release per week was a good target, I've since relaxed that to two. It would be great to implement an auto-update feature soon.

So what impact has bliss made? Well, bliss has now been downloaded 3,428 times by different individuals, following 14,126 visits to the website. Visitors come from a wide range of sources, review sites like about.com, forums like the Squeezebox, Sonos and Computer Audiophile forums and partner technologies like VortexBox. And what about the reviews? They are listed in the bliss Delicious bookmarks. (If you are a blogger, remember we offer free licences to bloggers that write about bliss!).

A big question: how many people purchase bliss? In all honesty I half expected to not sell a single copy! But we did a bit better...

So here's to the next twelve months: more music libraries organised, automatically, by bliss!