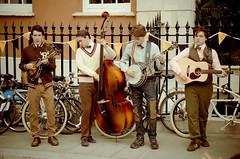 Various artists compilations are compilation albums that feature tracks by more than one artist. To get the most out of compilations, making them more navigable in your music library, you need to treat them differently to other albums.

Unlike albums, various artist compilations do not make up one contiguous body of work by an artist. This means they often require some form of separation while navigating. For instance, say you are interesting in playing an entire album by one particular artist. You don't want to be shown individual tracks from compilations the artist may be featured on. Conversely, sometimes listening to a compilation is a good idea, and some compilations are works of art in their own right. You might want to search for and play a compilation, so you want the compilations organized together, rather than going through different artists, adding track by track.

Here are five considerations you should bare in mind when organising various artist compilations.

Use the compilation tag

The best place to start is to be explicit. If a collection of tracks is a compilation, it's only fair to tell your music player. This gives a 'hint' to your music player to make sure to group the tracks together.

The compilation tag is named as follows, and should be set for every track:

Specify '1' for the tag, when the track is in a compilation. If not, it's best not to have the tag at all.

The slight issue here is that neither of these tags are officially specified by the various specification bodies. Indeed, the MP3 tag 'TCMP' became de facto by its use in iTunes. So, the unfortunate thing is that your music player may not support compilation tags.

Each digital music file you have has two main fields in which you can record the artist. The first is the track artist field. The second is, de facto, called the album artist field. Here's how these abstract names map to the actual tag names required:

Undesirable compilation 'fragmentation' often occurs when ripping CDs for two reasons. The first is that CD rippers often look up data online, on one of the free CD databases. This data is not always reliable or consistent, and so only the track artist may be populated and this may vary per track. Secondly, the data may be available but the ripper itself may not insert album artist tags. To avoid fragmentation of a compilation, you need to make sure that every track has identical values for certain tags. These tags, the compilation tag, album name, year and album artist, are potential identifiers for the surrounding release and should be the same across any given release.

Album name and album artist are both obvious. If half of the tracks from the same compilation are tagged with the album "Greatest Hits" while the other half are tagged "Gratest Hits" they'll show as two albums. Correct the spelling, and ensure the tags are the same. This also extends to capitalisation of tags.

'Identical' also means: if one of these tags is set for one track, it must be set for all tracks.

Decide on your 'Various' artist name

I suggest choosing the name 'Various' (assuming you're English of course!). The lack of a space, and just having one word makes things more concise and easier to work with later.

On the subject of compilation fragmentation, art generally doesn't cause fragmentation because it's not seen as 'identifying' metadata by music players. This means you can choose art which represents each track by embedding it only in that track without fragmenting an album. For instance, for pop compilations or 'greatest hits' albums, typically all of the tracks will have been released as singles. You can find the art for the single and embed that.

If you do this, prepare for a lot of work finding and embedding the art. Few of the album art programs support this easily. I guess this would be fantastic to add to bliss at some point.

Furthermore, if you do this then you may need to remove any conflicting art file within the same directory as the compilation.

Finally, it's also worth checking your music player supports different art for different tracks in the same album. Some don't.

I hope these ideas have helped you improve your compilation album management!

Acquiring, storing, organising and securing computer audio. It's all in the Music Library Management ebook, downloadable via email.

Thanks for asking for the ebook! If you also asked to receive the email course, can you confirm the sign up in an email my server just sent to you?

Thanks to garryknight and kevindooley for the images above.