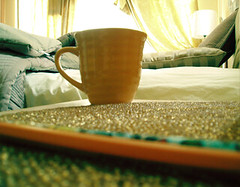 In the weeks leading up to Christmas I, prompted by some reports by users, discovered bliss was not playing nice with Mavericks. Not only were there some security issues related to app signing but also bliss was being slowed by App Nap.

This new release contains fixes for both issues.

The bliss application is now signed for Mavericks, so no further security errors should be displayed.

The effect of App Nap has been negated by declaring bliss as an OS X agent. App Nap does not work on agents. This is arguably something that should've been done before anyway; it better describes how bliss works so OS X can tailor itself accordingly. This also no means, for example, the extraneous Dock icon shown when bliss starts is no longer visible.

There's also some work toward supporting multiple music libraries in this release, although it's not exposed in the UI. Keep your eyes on the idea linked above for updates on this one, but it's looking likely to be completed for the next release!

The in-app updater can be used by existing users. You can also download the latest installer and install it "over the top", replacing the current installation. Fixes licences, already purchased, will be retained! Special note for Mavericks users: The "App Nap" bug will not be fixed with an in-app update, you must download the latest DMG from the downloads page and install/run from there.

Thanks to Lay Back in the Sun for the image above.