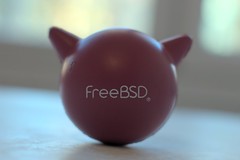 This week, news of a new project to install and run bliss on FreeBSD (and FreeNAS).

bliss currently has "official" releases for Windows, OS X, Linux and VortexBox. In addition there are a few unofficial packages built for NAS devices, and one HOWTO for Solaris.

That meant FreeBSD users were without installation instructions. FreeBSD is important for a number of reasons, one of which is that it is the base OS for the popular FreeNAS distribution. It's also commonly used as a home server OS.

So it was without bliss installation instructions... until now that is! This morning I received an email from Michael Descy, a FreeBSD expert, who has written up instructions on how to run bliss and also configure an init script to start bliss when your machine starts.

Michael's work is hosted on GitHub. The instructions start at the project's wiki page and the init script is committed into the project's source repository.

It's worth noting the project makes use of BSD Jails which is a handy way of virtualising and sandboxing applications. I make use of something similar on my own Linux home server using a project called KVM.

As an aside, it's worth noting for others looking to integrate bliss with their own platforms, bliss is built to run inside a Java virtual machine. This means it could be run in theory on any computer with a JVM. Integrators are best starting with the Linux installer which, despite the name, is actually a vanilla Java installer which can run on any platform with a JVM.

Thanks to FAndrey for the image above.