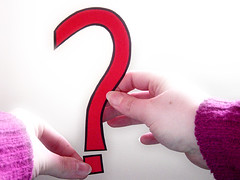 Conditional expressions allow you to define music file organisation structures in bliss that are tolerant of missing tags. Initially this was only shown to work with <discnumber> tags, but conditionals can be used to tolerate any missing tags, including <tracknumber>.

A conditional expression, ?, was added to bliss's file organisation capability some time back.

Initially I implemented this for use with the then-new <discnumber> token, because such tags are less common than those associated with the other tokens. As an absent tag leaves the file organisation rule unable to continue, mass automatic re-naming and moving of files would otherwise become problematic when using the <discnumber> token.

This would organise your music collection with one folder for each album, where if the files in the album have disc number tags they will be stored within intermediate disc number folders. For example:

The ? means: "if the tag relating to the preceeding token exists, evaluate the subsequent tokens in the | group. Otherwise, skip the | group".

You can make this tolerant of missing track numbers by changing it to:

Thanks to Desi for the image above.