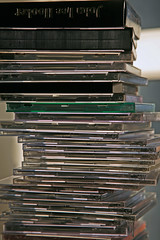 First up, if you like, you can just use the <discnumber> tag in a basic way:

In most cases though you probably only want to use <discnumber> when there is a DISCNUMBER tag. So you can use a new feature for file organisation patterns, a conditional:

Which means: if <discnumber> is set, evaluate the subsequent pattern within the pipe ‘|’ characters. Meaning you get either All Things Music Pass/1/... or Thriller/...

You can put further tokens within the pipe characters if you like:

Would give All Things Music Pass/Disc 1/...

The conditional can be used with any token, not just <discnumber>. More generally, the conditional is evaluated such that when the preceeding token is set, the subsequent token is output. The tokens within the pipe characters are essentially grouped in one token.

Get the new release from the downloads page. Existing fixes apply, of course!

Thanks to _sarchi for the image above.