Progress, or a lack thereof 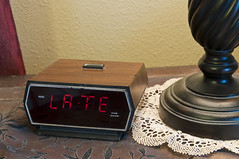 A quick update on the current development status of bliss. Regular readers and bliss-updaters will have noticed that the updates of bliss have slowed right down over the summer months. Whereas I used to make a new release available every fortnight, releases have been tended toward a monthly frequency just recently.

The porting of bliss to the OSGi platform to support in-app update has had a number of ramifications that have taken a long time to solve. First there was the general learning involved in adopting the new 'platform', but I eventually got-up-to-speed and managed to make a few releases.

Since the last release, I turned to extracting the parts of bliss that perform online lookup for cover art and metadata, so this code could be integrated into OneMusicApi. This took a little longer than expected, but I eventually finished it.

Then, in an effort to ensure all regression, integration and stress tests of bliss work correctly with the new codebase, I changed the tools I use to build bliss. This has led to another batch of work, further refining the bliss codebase so that it works well with the new tools. Fortunately, all this work has positive implications for bliss's code, but it is taking a long time to complete.

I'm hoping to have a new release out in a week or two with a few bug fixes and the re-structured codebase. Then, I'm looking forward to both tackling the top voted ideas on the ideas forum and also some more work on OneMusicApi, moving bliss's lookup smarts into the cloud.

Thanks to Photo Extremist for the image above.