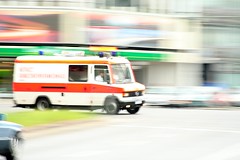 Emergency! An important bug has been discovered in release 20120821 which affected, amongst other things, the change art screen. As this is a commonly used feature I decided to issue an emergency release, which also contains a few other fixes and improvements besides!

The last release introduced a new bug with bliss's use of a technology called XPath. XPath is a way of querying an XML (a structured text file) document. bliss uses XPath to slice and dice the interesting information provided by online databases, such as MusicBrainz and Discogs.

This bug has now been fixed. The good news is that a few other bug fixes are also making it into this release!

Update from within the bliss application is possible but currently, you will have to restart bliss after updating.

Thanks to extranoise for the image above.