This website uses cookies to ensure you get the best experience on our website. More info.
This post may contain old screenshots of bliss which has been replaced by a new design. The basic structure of the user interface is similar though, so I'm keeping these old pages around in case they still contain useful information.

At last! After several weeks of work, bliss has been updated to boast its very own in-app, self-updater. The in-app updater will check to see if a new version of bliss is available. If you want to upgrade to the latest version, an 'Update' button performs the update without you having to re-install bliss. It doesn't even need to restart!

bliss's mooted in-app updater has garnered a number of supporters in the ideas forum , so I thought it was about time it was implemented! Nice idea in theory, except in practice I met with numerous considerable obstacles. Now, however, I think it's ready to go live. So here goes!

To get to the Updater page, click the 'Update' link at the bottom of any of bliss's pages: 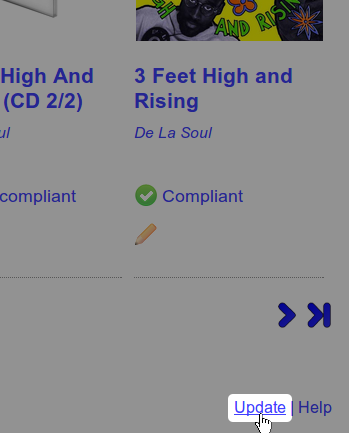 Once there is a new version available you'll see:

Click the 'Update' button and bliss will be updated. bliss should not need to be restarted. Note, however, that there's no progress indicator yet for updating. I'd expect updates to take up to five minutes, as bliss has to download the latest version.

Download the new release from the downloads page. In the next release I'm looking forward to also saying "... or update existing installations from the update page"!