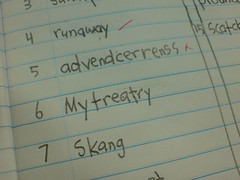 This new release contains a number of bug fixes and small improvements to functionality... including one long standing change I have meant to make for a while: renaming uncompliant to non-compliant!

As well as bringing the spelling accuracy up to a primary school standard (that's 5th grade), there are a number of other small improvements.

When there are multiple different album artist tags in tracks for an album, bliss no longer trusts any of them. Before, bliss would trust one of them, with the result that the identification of the artist for an album could vary between scans.

I added more useful information to the activity view when a tag can't be updated. Normally, this is because of the file being write protected or some similar problem. Before the error message would be long winded and obscured by techno-gobbledegook, so I cleaned that up. The underlying message is still there and will be revealed if you click the activity item itself.

For the track number formatting rule, a clarification for users of MP4 files (.m4a, .m4b, .m4p etc). Padded track numbers aren't supported in MP4, so instead bliss now provides a suitable explanation rather than blindly marking a file compliant/non-compliant.

I fixed a bug in the new web based tag editor. If you have a lot of different tag fields across your music library (this might occur in a very large library) the tag editor would not appear. I've fixed this.

Download the new release from the downloads page. Your existing fixes apply!

Thanks to elginwx for the image above.