At last: web based tag editing!

This new release adds the ability to edit tags in the tag editor. This has been a long requested feature, and I think it will be a useful adjunct to bliss's other 'higher level' features.

The tag editor is shown in a traditional table format, one row per file, with columns for the different tags: 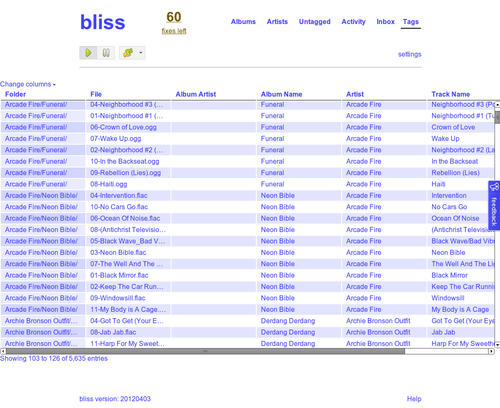 The files are ordered by their containing folder name. If you want to be able to re-order by other columns, please suggest it in the ideas forum. The default tags shown are track name and number, album name and artist name. You can show additional tag columns by clicking the Change columns link:

Click the checkboxes for the columns you want to see, and they'll appear in the tag editor.

Once you press [ENTER] the tag will be changed. All columns except for the Folder and File columns are editable (you can rename music files using the file organisation rule).

It's early days yet for the tag editor, so please suggest improvements in the ideas forum!

Since Christmas I've noticed the performance of bliss gradually worsen due to various functional additions, improvements and bug fixes. After the web based tag editing feature was implemented I felt this had got to the point where something had to be done. So I did it.

This release contains several performance optimisations that affect both the indexing of tags within files and how bliss assesses albums within the cover art rule. The overall effect is a noticeable improvement in performance, especially where storage is slow, e.g. where music files are accessed across a network. Hopefully you'll notice the difference!

Download the new release from the downloads page. Your existing fixes will be retained!

Thanks to D Petzold Photography for the image above.