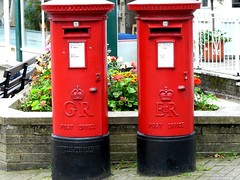 This new release contains a new user interface for accepting suggested fixes, a popular and much requested feature implemented and some other 'polish'.

The principal feature in this new release is the 'Inbox'. This is a new user interface that lists all suggested fixes for non-compliant aspects of your music library. I posted a sneek peek to Flickr a few days ago: 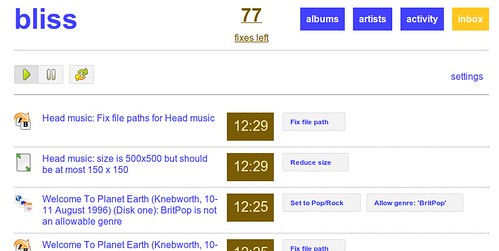 bliss creates one line per album, per thing that is wrong (in the example above you can see two lines for Head Music, one regarding file paths, the other regarding size of art). There's only a line for items that have fixes available.

If you happen to have an art size rule enabled in manual mode (not overwriting automatically) you'll see the suggested art that bliss will use. Here's where I'm hoping the Inbox will also form the basis of much faster ways to change cover art. Imagine all alternatives are shown in this list form, with one click choices for each album. This should speed things up a lot, I think!

Let me know your feedback on the Inbox. It's early days yet, but I think it might be a really useful aspect of the UI.

I've implemented the long requested idea to remember the setting for albums per page. Now, when you choose an albums/page size a cookie is saved on your computer containing your preference.

I also consolidated the choices around overwriting existing art when shrinking art - it was a little confusing as to whether shrinking art would occur automatically. It now works in the same way as when art is too small; there is a checkbox that appears. I've also added a checkbox to take backups when deleting old art.

Finally, there are some further fixes in this build regarding how well bliss works when Vortexbox is ripping files. I have made bliss much more circumspect as to when it inspects ripped files. It should now wait until the rip for the entire CD is complete before working with the files.

Get the new release from the downloads page. Existing fixes apply, of course!

Thanks to Mike Cattell for the image above.