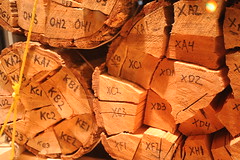 In the background, we took another step toward introducing custom rules by factoring out the trim rule introduced last release into its own stand-alone "bundle". In theory, anyone can now contribute their own "bundles" containing custom bliss regular expression rules.

For example a new rule to decode HTML encoding or even hard-coding find and replace of genres could be written by anyone using bliss.

However, it's still all a bit technical, so I think the next step will be to integrate this into a simple UI of some sort, and then see what people come up with. If you are interested in writing your own custom rules, get in touch because it should still be pretty easy to get something working.

If you are updating from a version older than 20141027, in app update is not recommended for this release, because of a fixed Java 8 incompatibility which is only resolved with a full re-installation.

Thanks to Wonderlane for the image above.