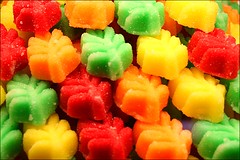 It's long been suggested that choosing cover art alternatives can be laborious. The Change art page can be used to choose from alternatives to current art that bliss finds or upload your own art. The trouble is you have to click into each page for each album, then click back to the previous page to work on the next album and so on.

The new user interface combines several albums' alternative art on one page. Albums are shown as a list, with cover alternatives to the right. Here's how it looks with alternatives loaded: 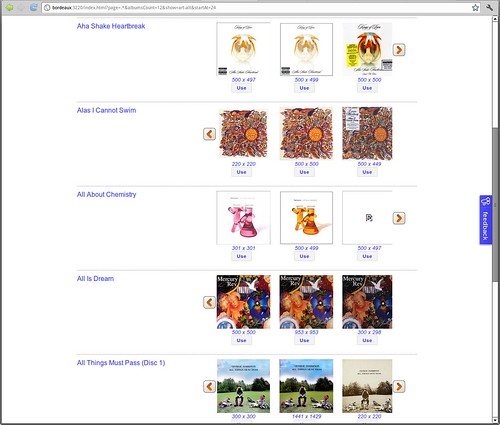 These alternatives are shown in the album page. There's a new option in the filter bar, 'Show'. Click that and you get the link to show cover art alternatives. The alternatives can be filtered by start character and compliance, and you can display 12, 48 or 96 albums, like when viewing albums in the traditional 'grid' view.

A few bugs and other items have also been cleared up in this release.

The new clear and rescan feature was not working correctly on Windows computers. This has been fixed.

Track numbers is ID3v1.1 tags are now supported. Previously these tags were ignored because they were erroneously lumped in with ID3v1 tags, which did not support track numbers.

Still on the subject of track numbers, bliss was previously having trouble with file organisation where some tracks in an album have track numbers and others in the same album don't. This is fixed.

Finally I added in a couple of safeguards to stop errant art or activity causing bliss to fail. Images over 5MB in size are now ignored, and clicks to fix items from the user interface are now throttled so only five can run at once.

Get the new release from the downloads page. Existing fixes apply!