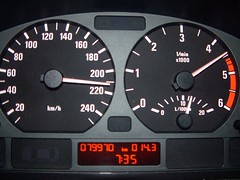 This release is a little smaller than normal, as a combination of the UK's spectacular number of bank holidays and my attendance at a wedding in Cadiz took their toll. Nevertheless, this release contains some useful improvements.

I have changed the cover art alternatives screen so that, rather than showing the results once all the online sources have responded to bliss's queries, queries are made in parallel and displayed as soon as each source has responded. Typically, the MusicBrainz and Discogs queries are a little slower than the Wikipedia and Google queries, so now you should see alternative cover art a lot faster than before.

On the topic of cover art results, I also implemented a few improvements to the Discogs search to make it a little more likely to find results.

Over on the file organsiation side of things, I added in a new token, <year>, which can be used in file organisation patterns. As requested...

Finally, I fixed an important bug concerning the location of music libraries. Before, if the music library was in the root of the specified drive, or was a child folder of the root, bliss would not accept nor work against the music library. This has been fixed. In addition, bliss was erroneously using the parent to identify the the music library, so if you changed bliss to a sibling library the same albums as in the sibling would be shown! This has also been fixed.

Thanks to storem for the image above.