Over the past couple of weeks I've been working on the new Mac version of bliss. The beta testers have been finding some good bugs, so it's not quite ready for release yet, but in the meantime I've been improving things for Windows, Linux and VortexBox users too!

A nice improvement in this release is a new look to the file organisation screen. Before there was a lot of text and it was hard to compare the expected and actual file paths for each music file. I've changed it to more of a table view, with the expected and actual locations next to each other in a fixed width font, so they are easier to compare. Here's a screenshot: 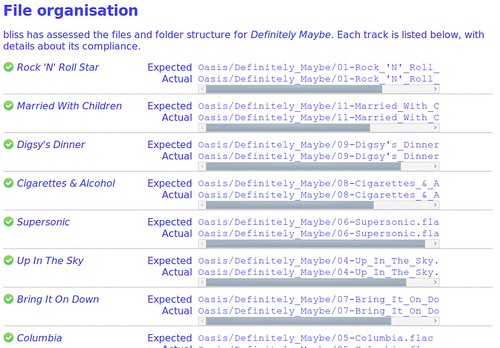 Performance of bliss, as it assesses very large albums, has also been improved.

Get the new release from the downloads page!