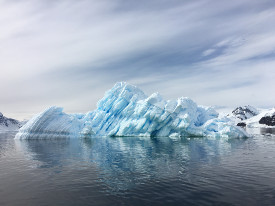 This release contains some significant refinements to the album list; we're trying to make the album overview list quicker to use and get stuff fixed, faster!

There are also a couple of bug fixes and improvements to how some album-level compliance assessments are displayed.

We've improved how compliance assessments are shown in this version. We're trying to tidy up the display so that the important information is shown straight away so working with the tool is faster. To reduce confusion, then, the first change is that compliant albums are just shown with a Compliant badge: 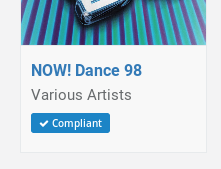 The problems in non-compliant albums are shown straight away (you'll notice there's no why? button anymore). In addition, an album-wide Fix button is offered, which fixes every issue in the album. If you want to fix individual items then this can be done from the album page by clicking the album name. 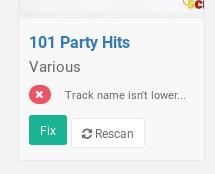 Sometimes the Fix button is greyed-out. This can happen if there is no way of deciding a deterministic fix, for example when two or more contradictory suggestions are offered. Examples of this is where there are multiple genres suggested for an album, or with the album track duplicates rule. The button should state why it could not be enabled in a tooltip.

Due to these changes we've also been able to fit in more columns of albums to improve the information density.

We've made some more improvements in this version:

Thanks to Cassie Matias for the image above.