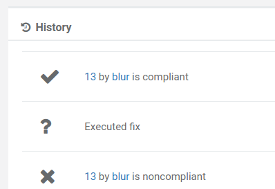 This new release includes some more UX improvements - chiefly communicating activity and fixes made specifically for an album, plus a bunch of other bug fixes and other improvements.

This release adds a useful new feature to the album page. Each album now has its own activity panel, detailing all previous work on an album, including previous assessments, fixes executed and changes made: