This release offers up the first iteration of the long asked-for duplicate removal feature. This initial step adds duplicate detection, with removal and further refinements to come in later releases.

We finally started work on the longest standing, highest ranking idea on our ideas forum - duplicate file removal. This release adds the ability to detect duplicates within an album, but not between albums, and it doesn't allow files to be deleted yet either.

This has been packaged inside something we're calling the "album integrity" group of rules. 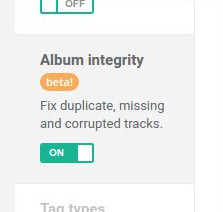 The idea is that this grouping could include other new features:

So click the "Vote" button on those above ideas if you want to see them in bliss.

And, of course, use the ideas forum to post new ideas for how the duplicate track feature should develop! For now, the duplicate removal idea will remain "Started" until removal is completed, and then I'll mark it complete.