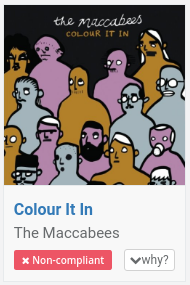 I'm just running final sanity tests on the next build of bliss, and it contains some of the most important new code for some time; probably since lookup for missing genre and year tags was added.

I've added album-level tag correction. This means bliss will now check that your current metadata is correct, according to online databases. For example, mispelled album names, mis-typed artist names, incorrect years... they all get noticed, marked  Non-compliant and a one-click fix suggested to address the problem.

Another description of it may be release canonicalisation - synchronising the data in your library with online canonical records of a given release.

(As an aside, this next build is something of a whopper; despite only being completed in the normal two week sprint I've not only managed to fit in basic album-level tag correction, but also a nice redesign of the album overview grid to make it "line up" more and make it look generally tidier.)

I've espoused the 3 Cs for a long time, but this is the first time I've implemented anything about correctness in bliss. It has been a long time coming.

Correctness is about making sure the data in your music library is correct. It's easy to introduce errors into your music library; some sources of data online ( I'm looking at you FreeDB) are less than reliable.

We could also consider correctness being about audio data integrity, which is something else that could be added to bliss... please vote for it!

The first release of tag correction only performs album-level tag correction. What does that mean? It means only album level tags such as release year, genre, album title and album artist are checked. Track names will be coming in a subsequent release.

Once you have enabled the tag correction rule, bliss will assess all of your albums for the correctness of each field:

Each album's compliance is shown on the album overview and detail pages, as normal:

You can click the Set to 1997 button (or whatever) to make the fix, make the album compliant, and more importantly correct the data in your music library.

This is a first release; there are some improvements to make to make it extra useful.

Disc numbers are an interesting one. Albums with names with disc number artifacts, e.g. American Anthems (disk 2) will show as non-compliant, with a suggestion to change to simply American Anthems. The trouble with this is, if the tracks aren't already tagged with DISCNUMBER, tracks from all discs will be combined together in your music player.

Track checking is the first step to fixing that one. The next step is to move the existing "missing tag" code, which currently just works for genre and year, to this new codebase. This will save some code, make things simpler, and also provide more tag fields which can be filled in, which are missing.

The data provided for tag accuracy checking is from the releases in the Linked releases panel for each album.

Currently you have no control over this box. But we could add a way of marking one or more releases as being the "golden" source of data for a given album in your collection, and even prioritise them.

Furthermore we could also make the choice over which linked releases are automatically chosen a bit more configurable.

So that's what's upcoming, let me know if you want to give the beta a whirl! Full release next week...