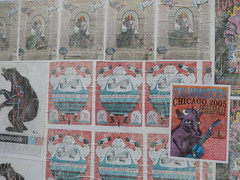 Since the bliss project started over seven years ago (!) it has always required a cover art filename to be stored in an album directory; co-located with the music files.

This new feature allows much more control. You can retain just one image file being managed as now. Or you can specify no image file or multiple ones. This means that if you don't need separate image files, you no longer need to save them and have them (potentially) clutter up your music folders.

In addition, it means if you use different music players that do require image files, and the mandated naming of those files is different (e.g. one requires folder.jpg and one requires album.jpg) you can cover that too; simply specify both folder and album.

To specify multiple image files, use the comma key to separate. I want to retain the space bar for other purposes... I've had an idea that allowing the same 'templating' as in the file organisation rule might be useful for specifying image filenames; this requires spaces to be allowed. For example, specifying a filename as <album name> would mean you would get a Revolver.jpg filename. If this sounds useful, you know where to ask.

In addition, the cover art filename can now be a library relative path, by prefixing with "/". This isn't that useful without the templating described above, because if the path is hardcoded to a library location then all albums will try to save the same image file. If templating did work, you could do something like /artwork/<album artist>-<album name> to maintain a folder of album artwork.

How does it work?

If you specify no image file, bliss won't look for a separate image file and it won't save one when it finds or you choose new artwork.

The other thing is this doesn't delete image files. If you don't specify an image filename, bliss will simply ignore image files. So in the case above, you'd then want to perform a manual deletion of the image files using your file explorer, or whatever.

Let me know how you get on with this new rule!

Thanks to swimfinfan for the image above.