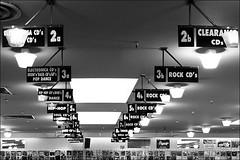 How are your digital music genres organized? Are they general musical styles, like 'rock' or 'pop' or are they very specific, like 'ambient techno' or 'bubblegum pop'?

Having a coarse grained genre classification for your MP3s can have advantages. What's a coarse grained classification? It means there are few genres, probably fewer than ten, with a lot of music assigned to each genre. The genres are likely to be general, like the 'rock' or 'pop' examples I gave earlier. We could call this the fundamental music genre list because the genres are the fundamental, elemental building blocks of musical genre, from which other, finer grained genres come.

Acquiring, storing, organising and securing computer audio. It's all in the Music Library Management ebook, downloadable via email.

Thanks for asking for the ebook! If you also asked to receive the email course, can you confirm the sign up in an email my server just sent to you?

The key disadvantage is that music can vary within a genre, so the coarser grained the genre the more variabilty exists within the genre. This means playlists constructed from a genre can vary quite a bit. Genre is only a guide to styles of music. Genre is largely derived from musical period, the instruments used and techniques used to play them.

So which genres go into our fundamental music genre list? We're aiming for coarse grained genres, ideally as few as possible while maintaining clear distinctions between genre. To help us, many of the online music databases publish a list of genres, which they assign artists and releases to. Here's a selection:

From those lists, here're the genres everyone agrees on:

Jazz and Classical are clearly enormous genres with huge variability within. I could break classical into romantic, baroque, ballet, neo-classical, minimalist... and so on. Still, we are aiming at brevity, so classical it is.

Next, there are the genres agreed by at least three sources:

In addition, hip hop and rap are both represented as distinct genres, but let's combine them as 'hip hop'. I will add 'New age', because I don't think it applies to any of the other genres. I think 'Folk' should include 'World' music and therefore 'Latin' and 'International' styles also (ideally, 'Folk' music I believe to be music distinctive of a given culture; much so-called 'Folk' music I think these days is actually 'Rock' played with acoustic guitars). 'Pop' depends on the style of the 'Pop'(!); 'Pop' can be considered part of 'Rock' music, given its traditional rhythm and blues origins, or perhaps Electronic, depending on the nature of the music. Therefore, it doesn't make the list. This leaves us with our final listing:

As I compiled the list I realised that the right classification really depends on your own musical tastes and your existing library. If you have a library biased toward particular types of music, which most people probably do, it makes sense to expand the genres granularity of that genre. For instance, if you are a classical music fan with a few jazz records, retain the above list but expand classical into, as mentioned before, baroque, romantic, minimalist etc.

So, maybe the conclusion is that the fundamental music genre list is a start point, from which you can expand the detail of genres as your music collection demands.