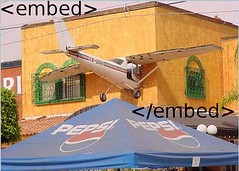 Embedding album art derives all kinds of advantages. The art is more portable from player to player, so it makes sense to embed album art if you can. But what if you have existing separate image files saved in your music library and they aren't embedded?

Some music players automatically grab album art when you play music and save it back to the same directory as whence the music came. An example is Windows Media Player, which saves separate files named 'folder.jpg'.

bliss provides a way of embedding these files in batch. It works by finding the image file for each album directory and then embedding the image in each track of the album. It does this automatically when you define your album art rule to require both a separate image file and have the image embedded. Because it knows you want both, if it sees one is satisfied but not the other, it will use the art that does exist to satisfy the location that doesn't (it works the other way around too, from embedded art to separate file). Therefore, a track with no art embedded will gain the image from any existing separate image file.

bliss also builds in some heuristics to make sure the album art is not incorrectly embedded in tracks of albums that are unrelated. This can be a problem with some software when you store tracks from different albums in one directory. bliss reviews the album and artist tags for these tracks to ascertain whether it is the same album, and whether the image can therefore be embedded.

In bliss, choose 'settings' and change the filename to be whatever consistent filename you have saved (minus the file extension, so 'cover' or 'folder' are both examples). Make sure images will be embedded. Then click 'apply'. Here's a video:

Apologies if I sound suicidal; I'm no voice-over man!

Thanks to Liamngls for the image above.